EUR: The City of Mussolini's Dreams

As most of the twenty-first-century metropolis, Rome is also caught between two incompatible contending realities: the vigorous energy of continuously expanding modern capital, and the inertia of ancient city center that makes Rome one of the most popular tourist destinations.

I know I shouldn't dare to say, but after visiting a sea of ancient ruins and historical monuments in Rome, I was getting a little bit burned out about old Roman stuff. A simple question came to my mind — the significance of ancient Roman architecture and city planning needs no reiterating, but what are Rome's contemporary practice of urban developments looks like?

We've heard from a local urbanist that there is an interesting district to visit, away from ancient city center and a crowd of tourists, which might help us understand at least a part of their contemporary urban realities. 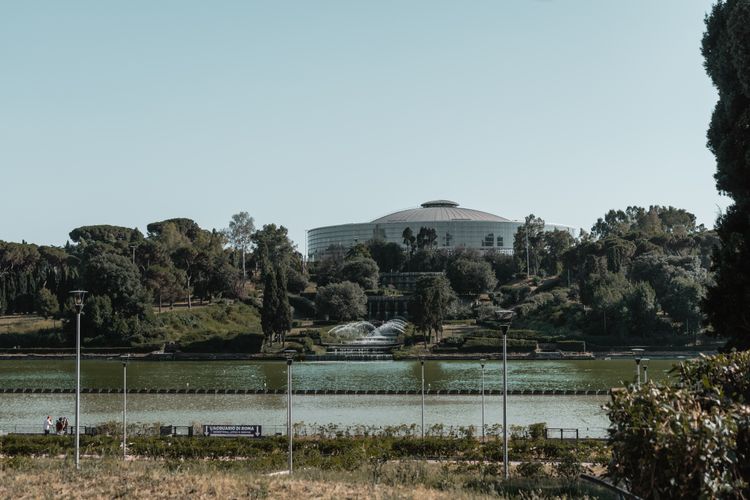 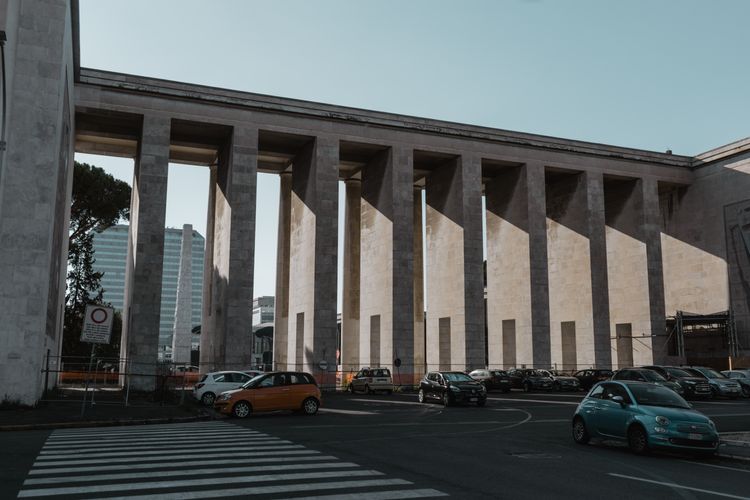 We visited EUR, a district located in the south-west part of the city. EUR stands for Esposizione Universale Roma; it was originally planned in the 1930s as the site for the 1942 world's fair to showcase twenty years of Fascism in Italy. It was initiated by Benito Mussolini.

The world fair never happened and the district had left uncompleted though, due to the intervening of World War II. After the war, the site has been redeveloped as the basis of an out-of-town business district, and now, EUR functions as Rome's new city center. The unfinished Fascist-era buildings were completed and other contemporary buildings were built during the 1950s and 1960s. 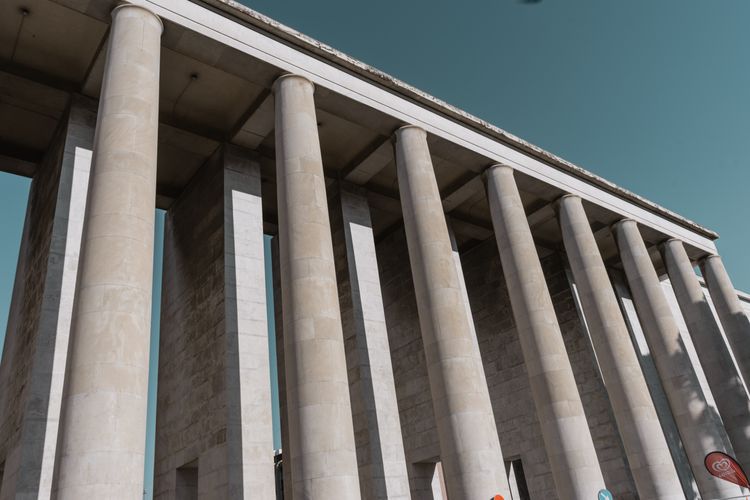 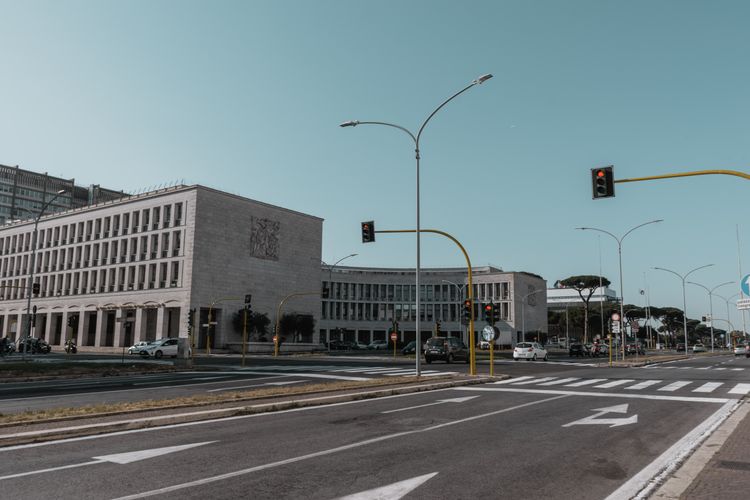 The district is well-connected from the historical downtown by metro, so it wasn't so hard to reach there. The district has a perfectly symmetrical shape — at the very center, there is a big boulevard from which neighborhoods spread out to opposite direction. We started our walk from Parco Centrale del Lago and continued on the inner neighborhoods to visit Palazzo della Civiltà Italiana and other landmarks.

Although it doesn’t quite feel right to enjoy them, the district is full of Fascist-era architecture and urban design, which take a reference from Roman classical, Renaissance style and imperial town planning. There is also an influence of Italian rationalism as well, which created buildings of limestone, tuff and marble, and other traditional materials associated with Roman Empire architecture.

The district has also been successful to attract new housings, educational and government facilities to meet the need of ever-expanding modern capital. EUR is basically a site where you can enjoy a blend of fascist architecture and contemporary highrises in one place. 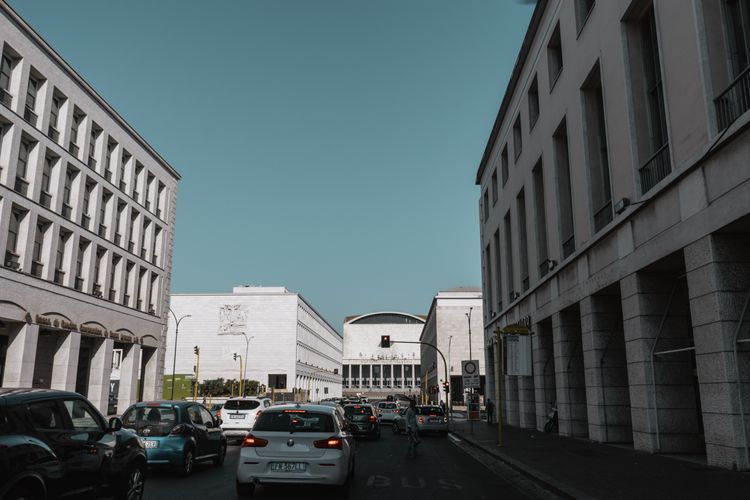 In the back, there is Palazzo dei Congressi — a modern interpretation of the Pantheon by architect Adalberto Libera. 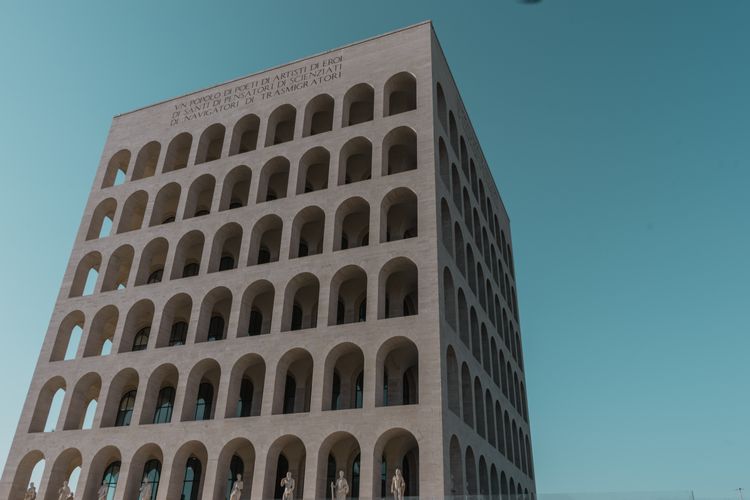 Palazzo della Civiltà Italiana, perhaps the most famous Fascist architecture in this district. Its neo-classic style is worth seeing.

Despite its unforgettable connection with Italy's dark history, in this article, the author takes a favorable position toward EUR.

It doesn’t quite feel right to enjoy architecture and urban design that both departs from Rome’s classical and Renaissance icons and has its genesis in a totalitarian state. Like many examples of early 20th-century design in Italy, one must separate the form from the ideology. However, there is solace in that many of the buildings were completed after WWII, that the site was home to 1960 Olympics events, and the district became a natural place to expand housing, educational and government facilities for the new democracy.

To be honest, it was hard for me to find "the new democracy" in EUR — during our short visit, what I saw was rather a nostalgic imitation of what they had in the past.

We've noticed the uncomfortable number of cars, too. Some of the articles about EUR we found on Google boldly state that EUR is walkable. Let me tell you, it is NOT. It felt like Parco Centrale del Lago was surrendered by expressways and multitude of cars. Most of the landmarks we've visited managed to spoil themselves by having large parking lots in front of them.

Though, it is surely compelling and educational to see how this district stands on the complex layers of history and ideologies that travel over time. A visit to EUR would surely make your trip to Rome a little more special and unique.