Mihama American Village: A story on the land formerly occupied by the U.S. military

We recently visited Mihama American Village, a large entertainment complex located in the central part of Okinawa main island, Japan. The motivation of our visit wasn't the entertainment per se — rather, we were curious about the urban development on the land formerly occupied by the U.S. military.

We couldn't ignore a huge gate to an army base, right next to the amusement park, when we started walking around the complex. 53.5% of the land in Chatan, a town where Mihama American Village is located, is still taken up by military camps and facilities.

A little bit about American military bases in Okinawa

Yes, after World War II, there is still a persistent presence of American army forces in Japan. 70% of them is concentrated in Okinawa, a southernmost Japanese prefecture comprising more than 150 islands located between Taiwan and Japan's mainland.

Born in the main island of Japan, my impressions of Okinawa has always been a little bit bitter — Okinawa is where the worst battle of the Pacific War happened during World War II, by United States Marine and Army forces against the Imperial Japanese Army. A QUARTER of innocent civilians were killed. More than 70 years after the war, the suffering continues. American army forces are here to allow the U.S. to conduct regional security cooperation activities in Japan and in the Far East, and that inevitably involved constant friction with the locals.

If you are curious to know the size of the bases in Okinawa, this is the map. It covers nearly 15% of the Okinawa main island — if this number doesn't mean much to you, this is more than half of the size of Tokyo (and Tokyo is so fricking huge!). 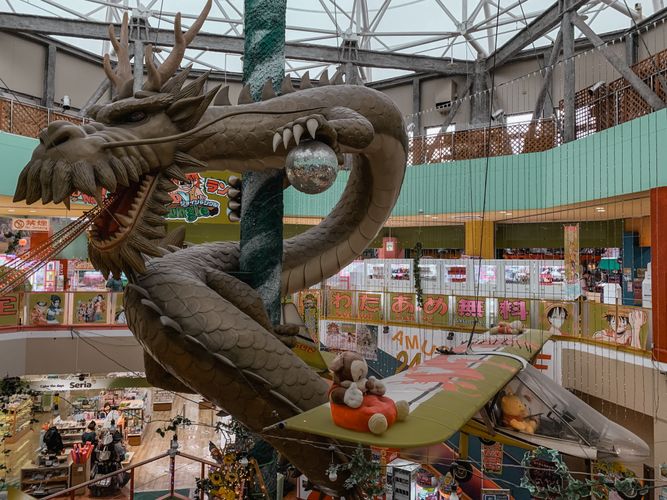 The Dragon Palace, a famous game center in the American Village 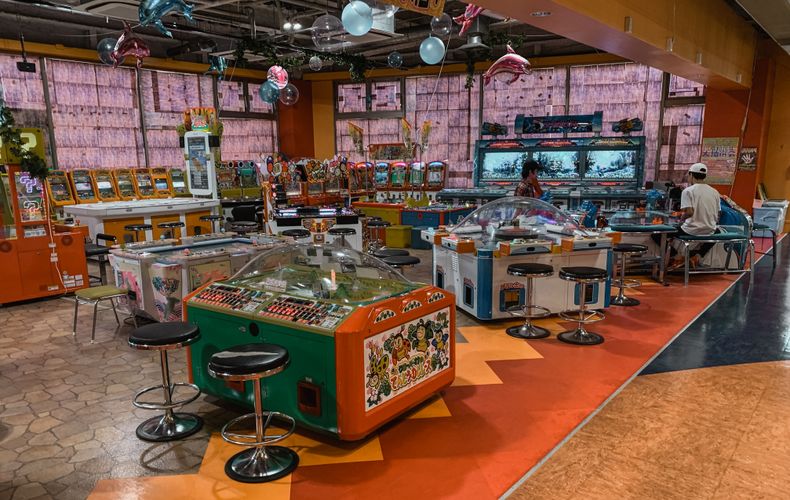 From an urbanism perspective, we're interested in the impact of army bases in the urban environment and everyday life in Okinawa. We're especially curious about what happens to the land that has been recently returned to Okinawan autonomy, such as Chatan and Mihama American Village. 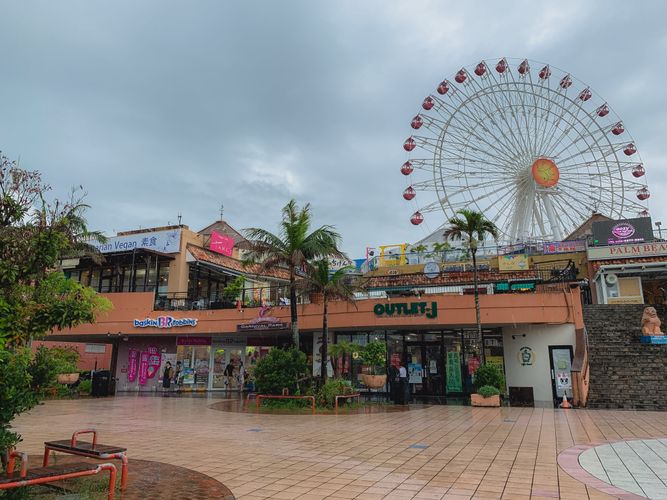 Inside of the entertainment complex and the iconic Ferris wheel. 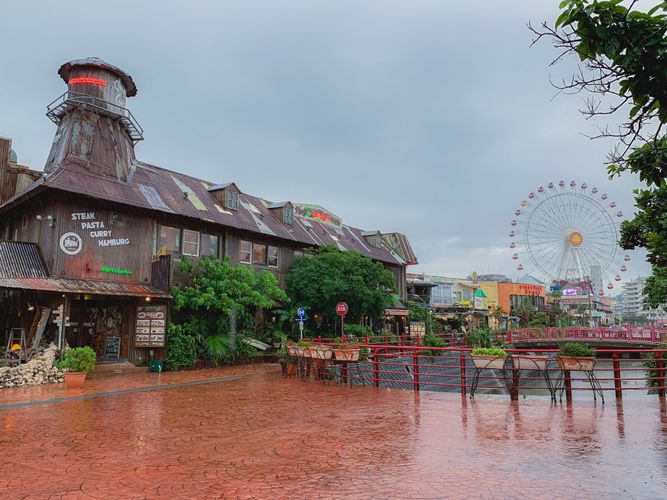 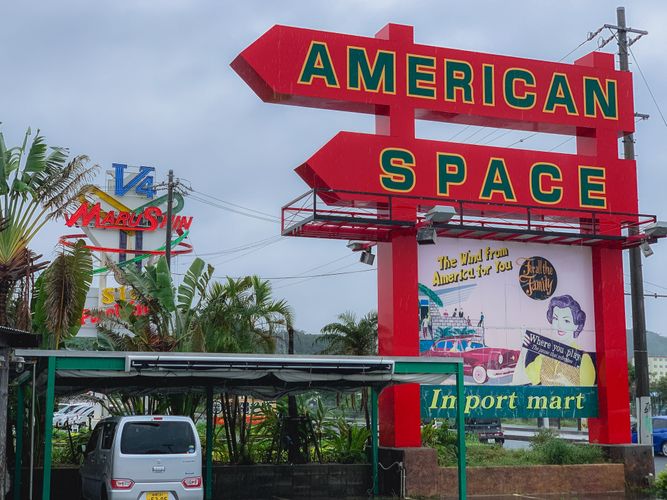 American import shop right next to the army base.

It's hard to believe by seeing the current sate, but Chatan used to be beautiful farmland. In 1945, the United States Navy landed at the port of Chatan, and residents needed to flee. When they came back after the war, the land has drastically transformed with military-related facilities. After the long years of struggles, this part of the land has been returned to the city, and this is when the development that shaped today's Mishima American Village started.

American village was planned to regenerate local business, by installing commercial and resort facilities with direct access to a beach and a public park. Based on the great location that faces the east china sea and its short distance from the city of Naha, and
the unique mix of Japanese and American culture that is specific to this place, their answer was creating an American themed resort and amusement complex.

Urban development of Okinawa on the land formerly occupied by the U.S. military

Isn't it ironic that the local government decided to develop an American theme, their long-lasted enemy? Mihama American Village is commonly considered as a successful development on the formerly occupied land by the U.S. military. This amusement facility did indeed contribute to attract more visitors and create more local businesses, but I couldn't help but wonder the historical irony behind this whole development.

Again, 53.5% of the city of Chatan is still occupied by different types of army facilities, and most of them are located on the convenient, level ground around the highway Route 58. Local residential neighborhoods are divided and the residents have suffered numerous incidents involving aircraft accidents and crimes by US military personnel. 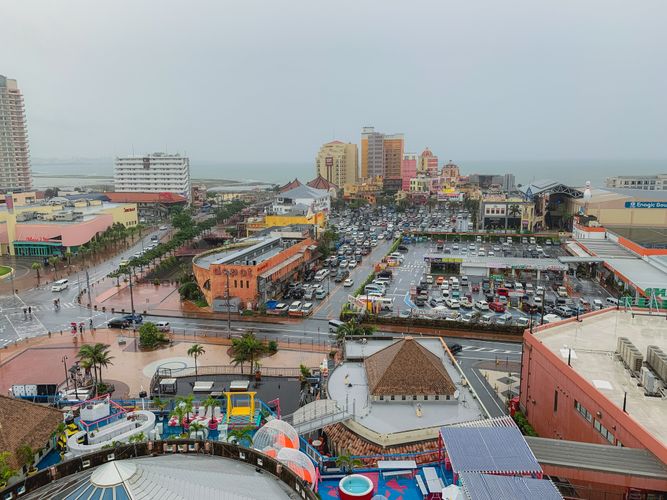 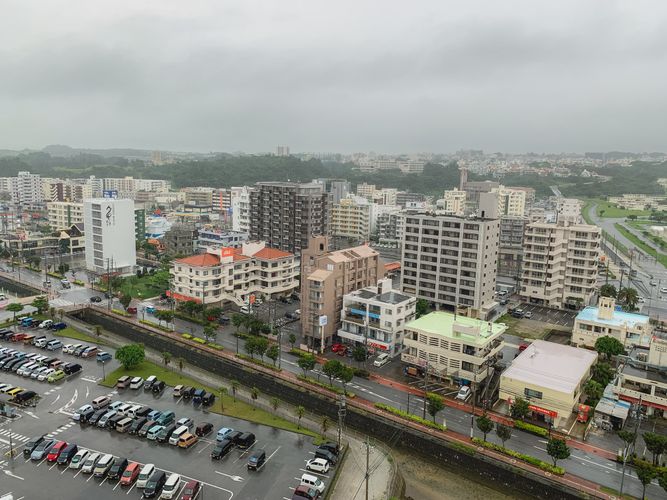 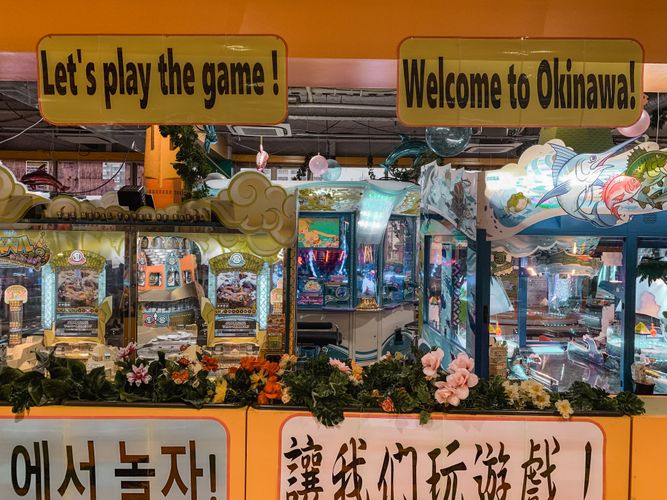 Japan and the US have agreed to advance the reorganization and scaling down of 11 US military bases in Okinawa, which include the relocation of the Futenma Air Base in Ginowan City to a coastal area of Henoko. The new location is situated right next to a residential area, and they seem to feel no compunction about destroying the beautiful natural environment there.

If you ever visit Okinawa, aside from all the beautiful beaches and breathtaking nature, please also pay attention to the continuous battle of Okinawan people against U.S. military bases, and how it affects the urban structure and their everyday lives.