A City under the Snow

Thid essay was originally written by Nayla Saniour on January 31, 2021 on her blog Urraca Urbana. You can read the original blog post here. Nayla grew up in Beirut and she currently works in Madrid as an urban consultant on public spaces strategies in cities across the world.

On the first weekend of January, starting on Friday, a historic snowstorm baptized Filomena fell upon Madrid as well as a very large part of central and north-eastern Spain. Her name sounded like the name of a frilly old lady, an opera singer, like the Castafiore. Filomena was gentle, silent, but implacable. For hours and hours, two days in a row, it snowed. Without a minute’s respite, flakes fell from the sky. We watched them through the window, fascinated. It was like a film scene that kept repeating itself, an almost artificial image, a snow globe larger than life. When we closed our eyes, the image of the snowflakes remained engraved in our pupils. And the snow kept piling up. 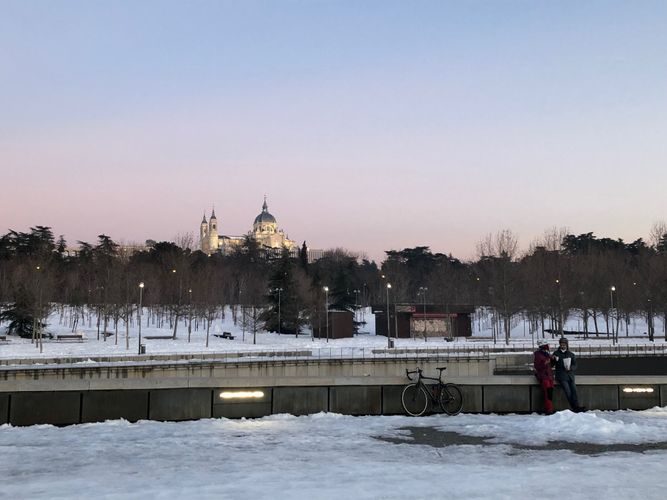 Almudena Cathedral on sunset viewed from the Río Manzanares 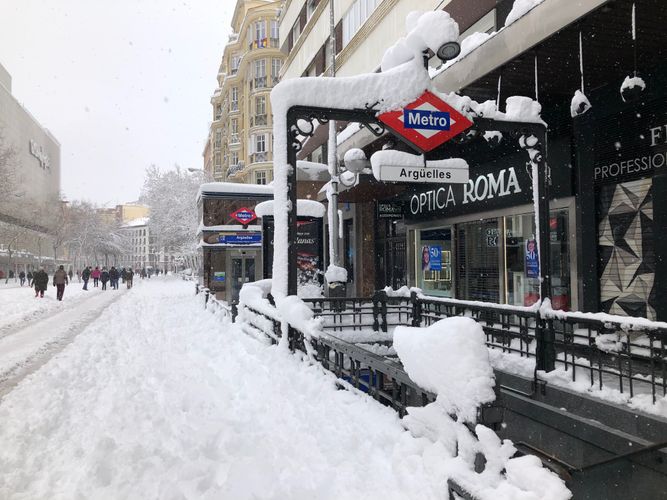 On Friday evening, when it all started, we went out to play in the snow at the park. Many people like us had decided to brave the incessant stream of snowflakes that filled our eyes if we faced the wind. It was dark and cold, the yellow reverberations made the whole thing look eerie, an uncanny scene of a mystery novel. It was beautiful all the same. The sky was unleashing its power in a calculated, inexorable slowness; the flakes were twirling in its wide darkness. In a clearing between the trees in the park, at the foot of a cast-iron statue of an unknown lieutenant, a couple was working hard on making a giant snowman. In a coordinated effort, they rolled a huge ball that reached their waist and seemed to weigh as much as they did. We had brought hot chocolate from the subway station next door. Under the freezing cold and the falling crystals, we had a great time. We formed small mounds of snow just for the joy of being able to crush them with our feet, enjoying our new status of implacable giants. We threw snowballs at the trunks of trees, the traffic signposts, and the statue of the unknown lieutenant (a man named Manuel according to the carved inscription, “take that, Manuel!”). The tip of our nose and toes were frozen, but it was beautiful all the same.

Giant snowman in the middle of Alberto Aguilera street 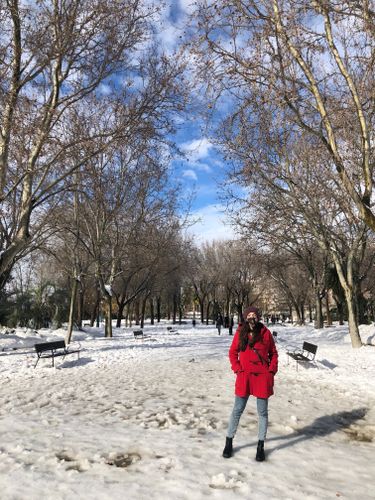 Saturday morning, when we woke up, the city was white. Unbelievably, inconceivably white. Where did it all come from? How could the sky produce such a marvel? How could so much purity accumulate and form a layer of sixty centimeters (more than an adult leg from ankle to knee), covering the city with a layer of powdered sugar like a gigantic and immaculate wedding cake? That morning was magical. Everything, absolutely everything, was buried under the snow. The boundaries between all objects had disappeared, everything was united in an infinite surface. It was impossible to drive, the silence was deafening. Only the intermittent, shrill noise of the traffic light signaling the pedestrian crossing time vaguely reminded us of a time when vehicles were invading the city. In the street, under the dazzling midday sun, people were everywhere at once, astonished. From time to time a person on skis would pass by, the most naturally in the world. The children were in snowsuits, overjoyed.

The adults had become children too. We wanted to touch everything, sweep everything with our hands, leave a trace in the surrounding beauty. Feel this powdery snow so light under our gloved fingers disappear to the touch and leave a magical trace before crumbling. We wanted to catch the snow in bundles, hugging and lifting those impressive mounds that had formed on everything that existed, from the roofs of cars to the garbage cans, benches, ramps, and ATM machines. The snowmen, those amorphous jolly creatures with carrots in their faces, had colonized the place, quiet works of art left by unknown authors. These proud little beings stood where, the day before, everything was grey and dirty, where the wheels of the vehicles squealed nastily, in a hurry to reach their destination. For a moment, these snowmen were the guardians of the joy of life, this childlike and universal joy in front of the white and majestic beauty of the snow. People walked freely, in the middle of these spaces that were once roads. Those times seemed so far away. Suddenly, everything seemed clear: let’s abolish cars forever! How much better we were without them! We could finally move around the whole city without restriction or worries. The city was ours. 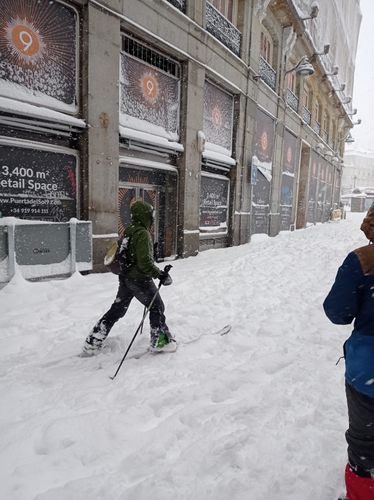 Person in skis on the street 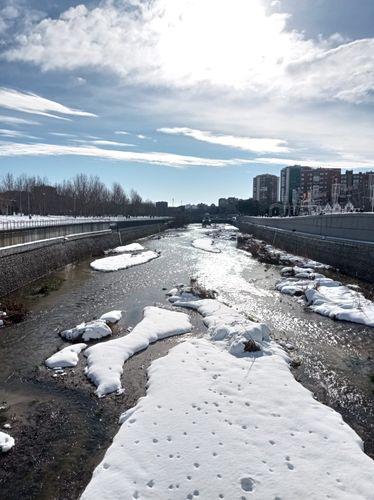 However, this euphoria was tainted with nostalgia: today the city was ours; tomorrow, everything will begin again as if nothing had happened, as always. We had to enjoy it before the snow disappeared and everything faded away. “Happy birthday to you,” we heard singing in Italian in the only open cafe on the street. The ambient cheerfulness hid a certain desolation. Everything was locked down, all the shops and restaurants were closed. People were queuing for bread in the only supermarket open that day. We tried to get in, to no avail. Everything was sold out, the cash registers were closing just then. Luckily we had food at home, so we spent the rest of the day in the warmth of the apartment, watching from the window the inexorable march of time suspended in these little snowflakes. 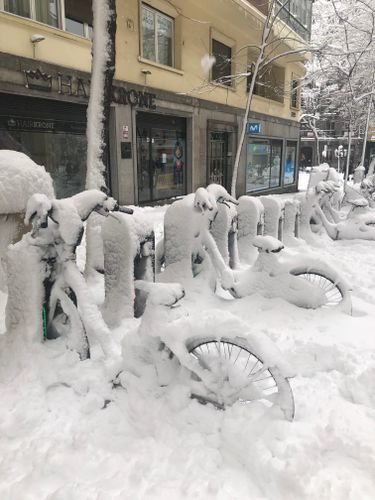 In the evening, we went out for a walk again, wanting to live and capture these historical moments as much as we could. To see the snow, touch it, feel it. The streets swarmed with people doing the same. While we were strolling through the Puerta del Sol, Spain’s “kilometer zero” and Madrid’s quintessential central plaza, a giant snow battle suddenly erupted. In the midst of the crowd, an incredible energy was swiftly transmitted, seemingly springing out of nowhere (or rather, out of some agitating elements subsumed into the multitude of people, waiting for the right moment to start a fight), and all of a sudden the snowballs began to fall in a shower of projectiles. Twenty, thirty, maybe a hundred people went wild without any warning, rushing to throw snowballs at unknown targets in an epic scene at the heart of the open square, between the majestic buildings covered in neon Christmas lights. Everyone against everyone, clans formed spontaneously within seconds. Energy circulated, spreading like wildfire. An invisible hand seemed to guide this impromptu war we found ourselves caught in. Quickly, we too started taking handfuls of snow from the ground, forming balls and throwing them into the air, somewhere, towards the enemy. In the excitement of the moment, between the nervous laughter and the missed targets, we had an existential enlightenment: that is how wars begin. A geography in space, some tension, a few agitators. An awareness of the enemy clan, whatever it is. And the battlefield gives way to massacre. At the very beginning, it seemed fun. But we could clearly see how this battle could degenerate into a stampede. Crowd energies, you never know. In fact, the next day, we came across a news story about how later that night, the “snowball throwers” gang had directed their forces to several police cars before being arrested. Far from the innocent game we had been playing. In any case, at the moment, the game was almost addictive. We tried several times to turn our backs on the roaring crowd, but there was always the urge to throw one last ball, to be part of the generalized exhilaration. Come on, this time we’re going home. A few steps later in the opposite direction, a new rush of several dozen screaming people surrounded us and attracted us again to the core of the action. Surrounded by hundreds of strangers in the street, we could hear the screams of those who, splashed by the snow, were taken by a desire for revenge. At the heart of the battle, during a particularly intense rush, a young man stepped forward into the crowd, carrying a vintage radio on his shoulder and slowly walking like a savior among his people, his speakers blasting the sound of epic music, exciting the crowd more than ever. We all felt like we were in a movie. 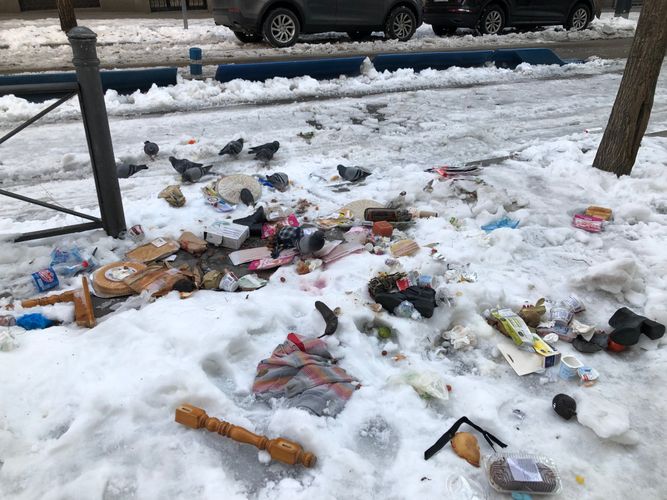 Trash accumulating on the street 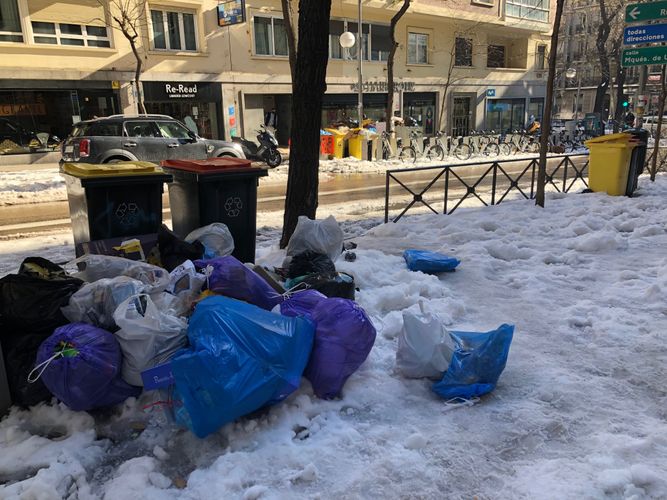 Trash accumulating on the street

After a few failed attempts to leave the game, we finally managed to get away from the crowd and, without looking back, we finally headed for home. Passing through Gran Via, Madrid’s emblematic shopping avenue, we could already glimpse the future: the asphalt lanes reserved for cars were already somewhat cleared. Dirty snow piled up on the sidewalks, revealing the hideous asphalt of the road, like a snake that had shed its beautiful white skin. Already, the beauty of the morning was being smeared. The flakes were no longer falling. After so much exaltation, such a vision filled us with nostalgia: all of this was ephemeral. Soon, the white would turn gray, soiled by the boots of pedestrians, the wheels of vehicles, the piss of dogs. Garbage would accumulate next to the garbage cans which, until then, had been buried under the sixty centimeters of snow. Blue, yellow, purple, the shapeless and grotesque plastic bags full of trash would be lying on the sidewalk. People would drop their cigarette butts everywhere. The snow would have done its damage: many trees would be broken, uprooted, decapitated. Whole branches would be strewn all over the ground. Large blocks of snow would slide dangerously off the roofs, imperceptible as the melting of glaciers, before crashing into the ground with an appalling noise twenty meters below, threatening at any moment to fall on a pedestrian. People would be on the lookout, we would slip on the ice. The sewers would be overloaded, overflowing with more water than they could handle. Soon, the desolation of the broken trees, majestic inhabitants of the city, would appear in all its sad splendor, like a trench-warfare scene. Soon the ugly would replace the beautiful. So ephemeral had this sweet breach been in our existence. By the time we got home through Gran Via after the snow fight, we could already sense all of this. We could only indulge in the nostalgia for that moment in time, that crystalline, powdery, cold and light magic snow, a pure layer above all our human defects, which had come to remind us of how small and insignificant we were on this earth. 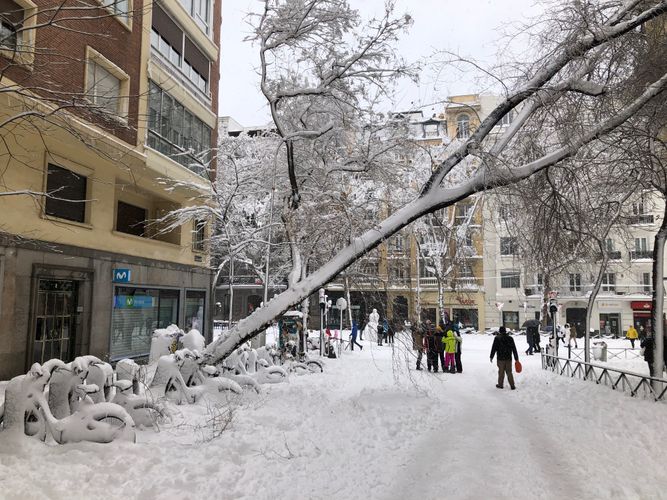 Tree fallen across the street due to the storm 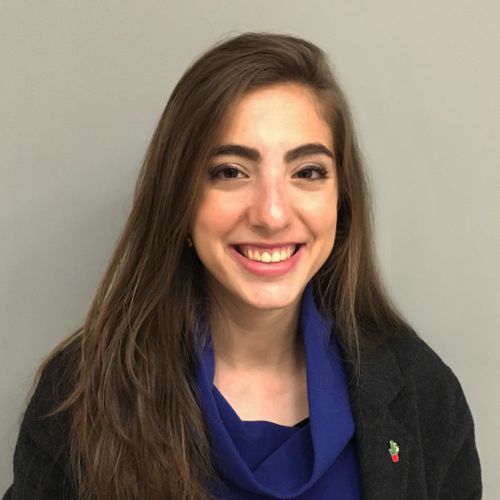 Nayla grew up in Beirut, where she graduated in architecture with high distinction from the American University of Beirut. She currently works in Madrid as an urban consultant on public spaces strategies in cities across the world. Nayla is also co-editor of the “Stories of Young Urbanists” interview series at All Things Urban, which explores the journeys of young professionals in urbanism. In her blog Urraca Urbana, she writes about her experiences in Madrid, focusing on the extraordinary ordinary things, the little stuff of everyday life.