The Urban Familiar: Specific Sites that Feel Like Home

This joint-essay was wriiten by Aushaf Widisto (aka Oswald / Oz), an urbanist, writer, and cultural researcher based in Melbourne, and Ann Guo, an urban anthropologist based in Seattle and Istanbul. 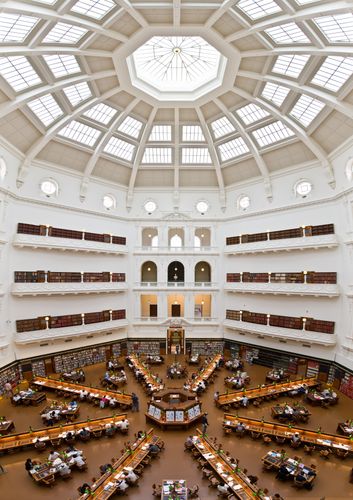 In The Image of the City (1960), urban theorist Kevin Lynch concluded that people orient themselves in cities by forming “mental maps,” which consist of five elements: paths, edges, districts, nodes, and landmarks. These five elements intertwine and overlap with each other to create a “city image” that’s embedded in the minds of its beholders.

Landmarks, in particular, are an interesting element to observe. That’s because, by their very nature, landmarks are unique and easily distinguishable from their surroundings. What do people think about when they think of Paris? The Eiffel Tower, of course. London? Big Ben. New York City? The Statue of Liberty.

When people ask me about an iconic landmark in Melbourne, the first place that comes into my mind is State Library Victoria (SLV).

Sure, Melbourne has other iconic landmarks like Flinders Street Station or the St. Patrick’s Cathedral, but SLV is especially meaningful to me.

It is Australia’s oldest public library and one of the first free public libraries in the world. The SLV’s La Trobe Reading Room, shown in the picture above, is my #1 favorite writing spot in Greater Melbourne (#2 is a cafe called Guild, which technically is also within the library’s precinct). I go there at least once a week, even though it’s not particularly close to where I live.

The library’s architecture is distinctive, which makes it a perceivable landmark. But it’s not just an architectural exhibit. It’s also a building with a function — a public space designed for the purpose of reading, writing, and exchanging ideas. And I think it does its job quite well.

That being said, I found it interesting and funny that it also attracts other forms of usage.

In the library’s courtyard, for example, there are two sets of human-sized chess boards. Every other afternoon, you can see some older men engaged in an intense chess match, and somehow they always have spectators watching.

On a staircase not too far from the chess boards, you can often see a bunch of kids doing ollies and pop shuvits with their skateboards. Not sure why they chose to skate there, but that stark contrast between “library” and “skateboarding” makes you wonder, doesn’t it?

Further down, on the sidewalk, some days you’ll find street musicians playing their tunes. And on the grass and benches scattered around there, ordinary citizens like you and me are chatting, having snacks, feeding birds, or whatever activity it is people do in public spaces.

People Vote with Their Feet

Renowned urbanist Holly Whyte once said that people vote with their feet. They use places that are comfortable and easy to use — and that’s not always in line with the place’s intended function.

Sure, a library’s primary users might be readers and writers. But being a public space, it is available to all sorts of people, and each one of them views the library differently. To a skater, it looks like a skatepark; and to a musician, it’s a stage.

Is that a bad thing? On paper, maybe it is. With all the planning and investment that goes into building the library, of course, they want it to be used as it’s intended to.

But in reality, all these activities add color to the library’s atmosphere. As long as they are managed, and don’t disturb the library’s primary function, I think they’re fine. It is a renowned landmark in the city’s center, after all, no wonder it attracts such a vibrant and diverse demographic.

After a long day of reading and writing, I like to wind down in the library’s courtyard and watch people do their thing. The chess players, the skaters, the musicians, even the bystanders and passers-by. People-watching is Holly Whyte’s favorite pastime, and as an aspiring urbanist, I do have a predisposition towards it as well.

By watching how people use public spaces, we can understand how to design them better — not just to design how it looks like as an iconic landmark, but how it’s actually used as a space. When designed correctly, a landmark can be more than an element in a city’s image, but also a seamless part of a city’s experience. To me, that’s what State Library Victoria embodies.

The pillowy scent of yeast and bread billows out from the wooden frame of Cihangir Tarihi Fırını in Istanbul, Turkey. "Cihangir Historical Oven," as the name translates, began in 1920 as a family business of Rum minorities. Although the bakery has since changed hands, it's original-built stone oven is still in continuous use today. 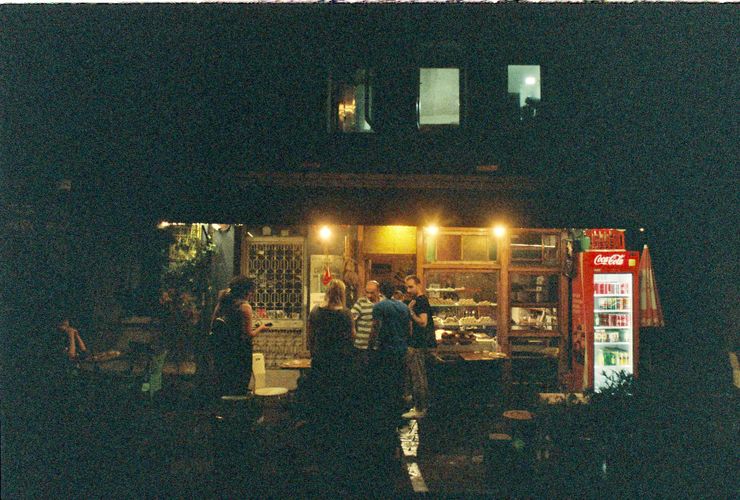 The bakery is tucked away in a quiet residential roundabout of a city that slumbers with one eye open--that is to say, a city conscious at all hours of the day or night. Cihangir Historical Oven is an example of such liveliness in this multifarious district. Nearby the bakery are vegan cafes, key cutters, coffee shops, vegetable markets, and even a mosque. The bakery is the only business in the area open twenty-four hours a day, attracting ebbs and flows of hungry patrons with its ceaseless activity.

Those who come to Cihangir Historical Oven arrive with the same goal in mind: to fill their bellies with the warmth of fresh baked goods. The universality of hunger, of a midnight craving, is validated by the accessibility of a 2-lira treat, regardless of time. Biscuits, simit (sesame-covered bagels), rolls, cookies, and loaves are fresh-made to fill bellies inclusive of gender, class, race, sexuality, ethnicity, and religion. Delicious.

An elderly man sits at the closest table from the door. He is the midnight supervisor, and distributes sugar biscuits or cheese-and-olive twists to paying customers. At other tables, people sit and chat with paper cups of dark Turkish tea. A person nearby munches on poğaça, an herbed butter biscuit. The roll crumbles in their mouth and bits of it drift down onto the ground. 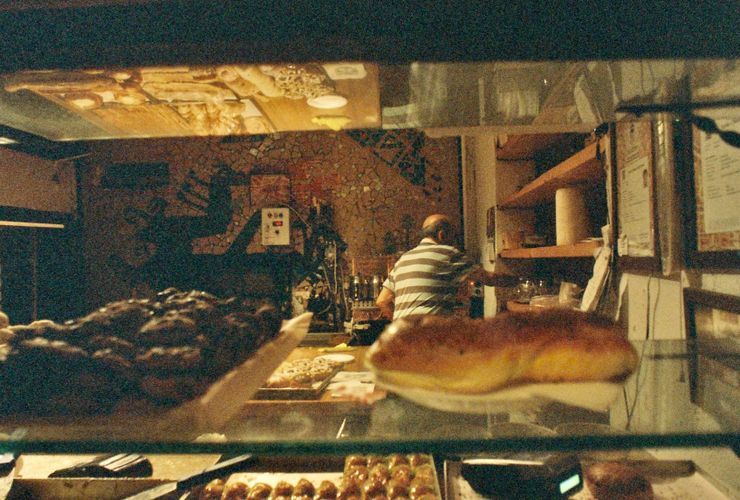 Home in the Urban Familiar

It's 2 AM on a Friday night, and I've found my way through Istanbul's labyrinthine streets to Cihangir Tarihi Fırını. People are stumbling towards the bakery after a humid night of cramped bars and techno clubs. Those in taxis blare music from their loudspeakers as they ride home. The synthetic heartbeat of trance fills the small neighborhood square; a passenger claps their hands to the sinuous rhythm. Cigarette smoke clings to the breeze like a deathly lover.

Within the largeness of Istanbul is many small multitudes of diversity. Cihangir Tarihi Fırını is one such example of a unique service contributing to an urban environment's kaleidoscopic whole. An intensely single-use space, the bakery's accessibility and ubiquity draws in a variety of visitors at a range of imaginable hours. As Jane Jacobs summarizes in The Death and Life of Great American Cities, such small enterprises contribute to a "lively city scene," combating "neighborhood monotony" by providing the "physical, social, and economic continuities" necessary for a well-integrated public street life.

Aushaf is an aspiring Urbanist, Writer, and Cultural Researcher based in Melbourne, Australia. Having studied Urban & Regional Planning at Institut Teknologi Bandung and Cultural & Creative Industries at Monash University, he combines these two disciplines to specialize in Creative City Planning, Placemaking, and Arts/Culture-led Regeneration. Ultimately, his goal is to leverage arts and culture to create better cities and communities. Some of Aushaf’s work can be found on his Medium page, where he also manages an urbanism publication called The Urban Condition. 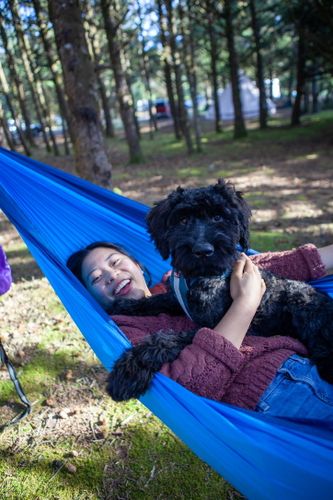 Ann Guo (she/they) is an urban anthropologist based in Seattle and Istanbul. When Ann isn’t roaming around on foot or ferry, they are usually exploring mountains, forests, and canyons with their dog, Seaweed.