This essay was written by Leo Porte, who researches the revitalisation of marginal villages in Japan. He has generously shared some of his research findings, which elucidate the importance of understanding rural areas just as much as cities.

Abandoned houses slowly collapsing as conquered by vegetation, bamboo groves taking over the man-shaped woods, wild boars devastating the very last paddy fields, and hordes of monkeys constantly raiding the precious tomato greenhouse of M. Ito, the sixty-eight-year-old youngest inhabitant of the area. At first, the village of Senjo might look like any Japanese marginal village of the 21th century.

Located in the mountainous area of Saijo in Ehime Prefecture on the island of Shikoku, the village presents rare singularities and a unique history. Established by descendants of the Heike clan seeking refuge after their defeat at the battle of Dan-no-ura in the 12th century, the village was originally composed of 2,500 stonewall terrace paddy fields erected five hundred years ago. Spreading over one thousand hectares, from which the name of the village 千町 ("One thousand hectares") originates, this manmade landscape might be the largest example of its kind in Japan. Regardless of its uniqueness, the village remains largely unknown even to the very inhabitants of Saijo city located no more than 10 kilometers away, as if the descendants of the exiled Heikei warriors are still in hiding. 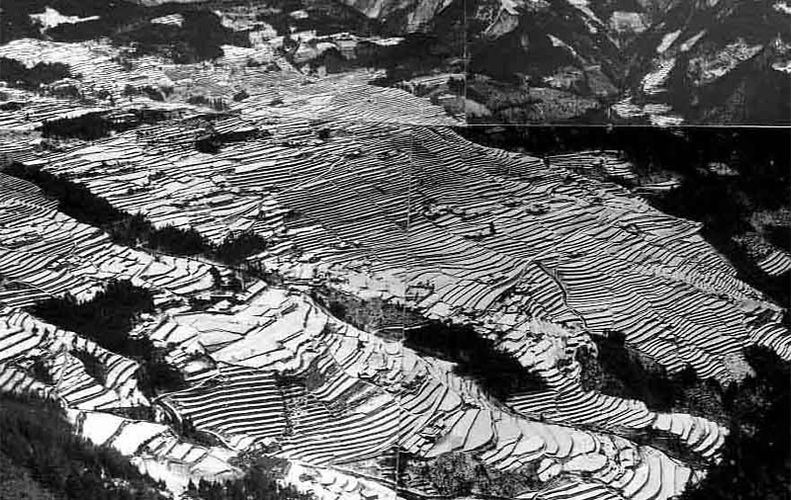 Cities, towns and villages are disappearing in Japan

Successive municipal merges and dissolutions from the Meiji (1867 to 1912) to the Heisei (1989 to 2019) eras, combined with the collapse of mountain-based industries in the second half of the 20th century have consecutively dragged the rural population to new urban centers, and gradually increased the isolation of rural communities which lack infrastructure and public facilities in the contexts of national rural depopulation and an aging society. These factors have brutally cut the total population of a village that counted more than a thousand souls not even fifty years ago to... nineteen.

According to a concept developed by the professor Akira Ohno of Nagano University, the next and final stage of villages like Senjo is the category of "shoumetsu shuraku" or "extinct village," which is defined by the total extinction of the village population.

Far from being an isolated case, the compilation of reports published by former minister and prefectural governor Hiroya Masuda in 2014 entitled Local Extinctions predicts the extinction of 896 cities, towns and villages across the country by 2040.

This national tendency leads to a tremendous number of issues, not only for the last remaining inhabitants of rural communities, but for the surrounding environment and consequentially neighboring urban centers too, because of a complex interdependence that Senjo perfectly reflects. 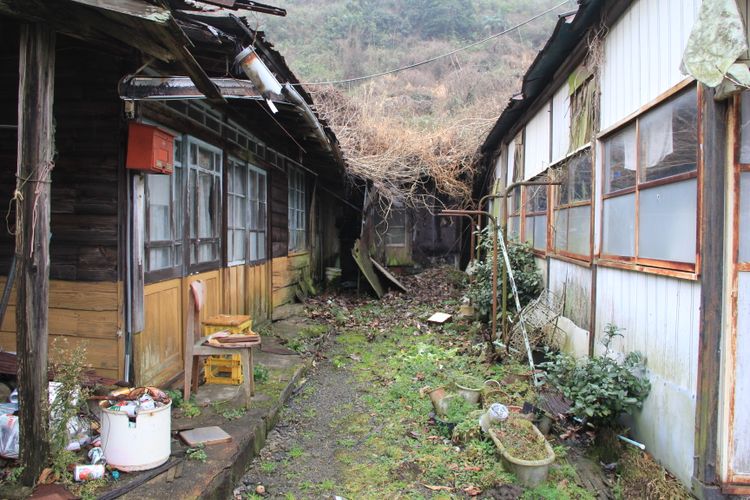 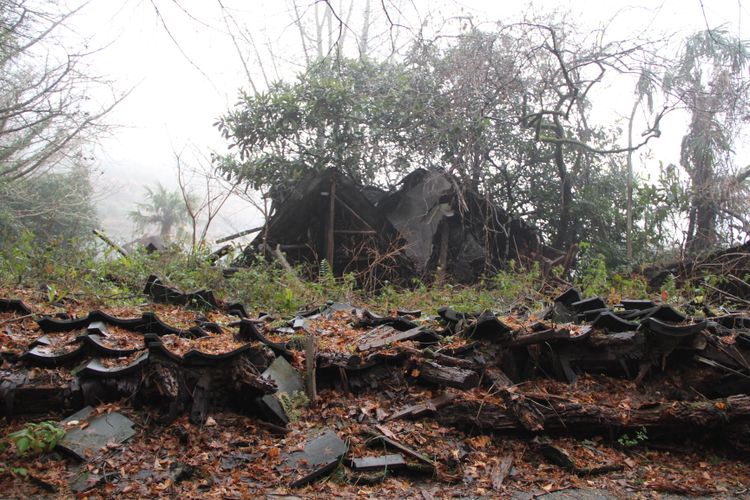 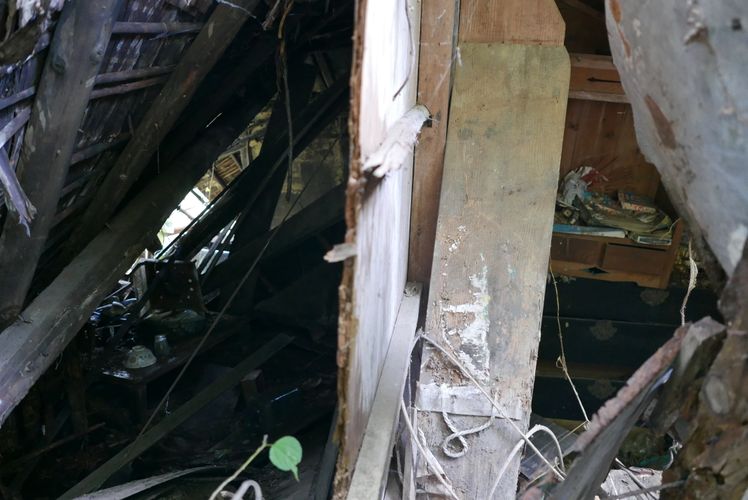 Outside and inside views of abandoned houses in the village.

What does it mean for the environment?

Far from the fairy-like scenario of a Hayao Miyazaki movie that could inspire the old scenery of the village, nature is not conveniently going to self-regenerate itself, erasing the marks of mankind and the responsibilities that they imply.

From the original 2,500 paddy fields, only 15 were still dedicated to the cultivation of rice in the last seeding season. This threatens the habitat of over 5000 species that directly or indirectly rely on paddy fields and that are now endangered by the loss of this manmade environment.

The postwar secondary forests of cedars surrounding the village, meant to be logged decades ago, are now depriving boars, monkeys, and deer of their natural subsistence. The thick canopies of cedars forbid vital access to sunlight needed by new saplings, and acidify the soil of their needles, inevitably forcing a growing wildlife population to come towards human settlements in order to find food, exposing rural communities at first and more recently urban areas which had depended on the vanishing buffer zone of villages. 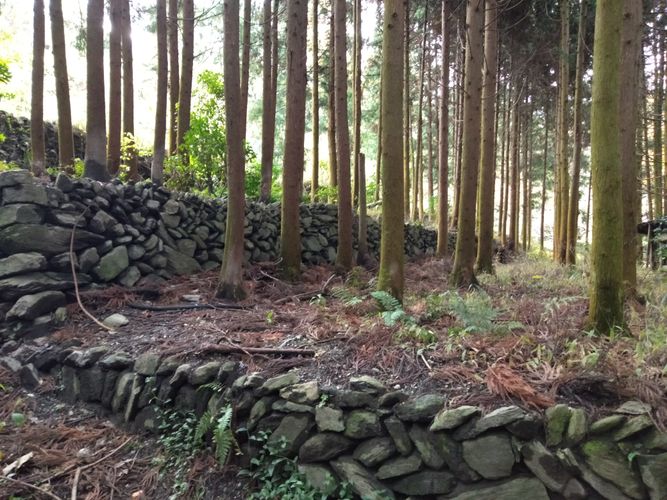 For the last inhabitants of the village, left aged and isolated in this forefront, the situation is also rapidly worsening. Beyond the physical exposure to wildlife and its possible tragic outcomes, constant damage — for example, the crumbling of stone walls, pathways and complex irrigation canals — caused by rummaging wild boars deteriorates an ancestral landscape, and through it the local pride that the community has identified itself by for centuries. 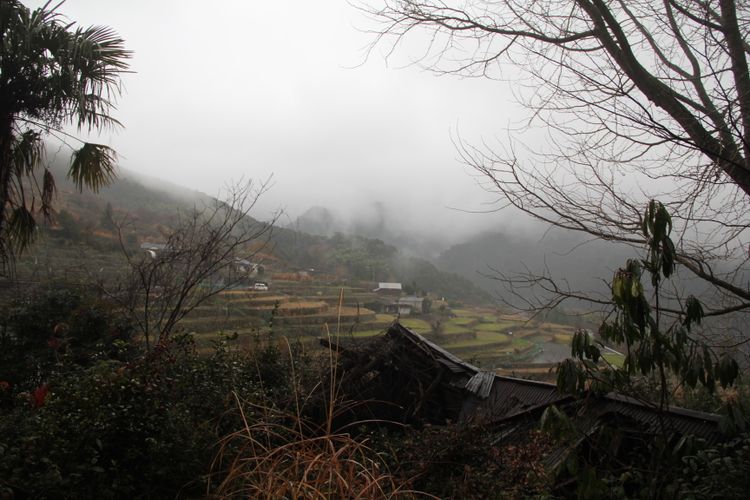 A collapsed house in the foreground and the last paddy fields of the village in the background.

A rising vulnerability to natural disasters in a global context of climate change is another threat to the marginal rural community. With a third of the village population incapable of moving by themselves due to poor physical condition or the absence of a vehicle (both criteria particularly affecting widows), the traditional local-scale social network of mutual assistance is reaching its limits. This network is, according to past reports, of vital importance in the aftermath of natural disasters. A majority of victims are rescued by relatives, friends or neighbors rather than dedicated emergency services — with access being difficult and the effective identification of potential victims laborious in villages where the number of uninhabited houses exceeds the number of inhabited ones.

The community house in Senjo, traditionally used as a shelter, is also well known for being in the most hazardous area of the mountain. The duty is left to the local leader, seventy-eight years old, to drive from house to house in order to secure each villager in the event of a disaster. 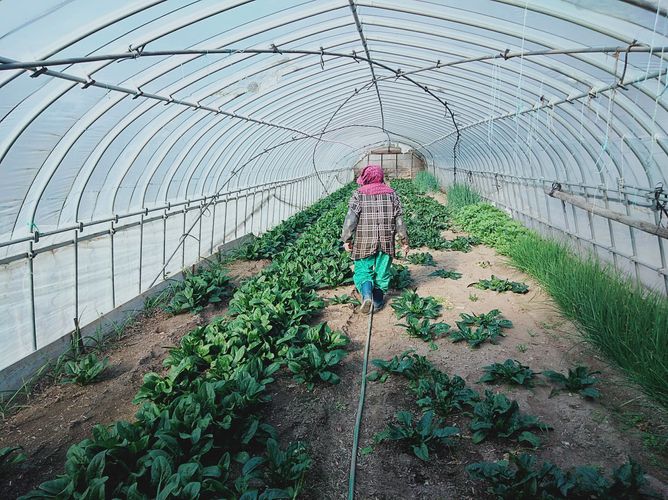 Mrs. Ito, 87 years old, in one of her greenhouses.

Typhoons have become more violent and frequent over the years; the nearby city of Saijo was hit by six in 2004, a first in existing records, resulting in the death of 5 people and 5.9 billion yen in damages. But unexpectedly, the solution to avoid such tragedies in the future might be the revitalization of these marginal villages. In a country composed of 70% mountains in which urban centers are located in the lower plains or coastal areas, the environmental condition of the mountainous upstream zones indeed has a direct impact on these downstream cities, towns, and villages. In conditions like these, the village of Senjo also has the capacity to reveal through its location and unique landscape the possible positive outcomes of successful rural revitalizations.

The extinction of small cities, towns and villages is not something that happens in a distant place that we can ignore — this national trend inevitably has an effect on how we live in cities.

Paddy fields, like other water bodies, have the capacity to retain water and thus reduce the risk of possible landslides and floods resulting from heavy precipitation. Therefore, Senjo, with its 2,500 paddy fields spread over one thousand hectares, could enhance the security of the downstream urban areas through a passive design approach that would also preserve a fading ecosystem. If the cedars that cover over 20% of Japanese forests were at last logged to build the cities that they were meant to (despite global mercantile logic), they could also reduce the exposure of urban residents to natural disasters since the poor water absorption capacity of their roots increases the risk of floods nationwide.

The standard structures against floods have shown their limits in Nagano Prefecture last year after the terrible damage of typhoon Hagibis. A new law was passed by the National Diet in the Fall to promote the restoration of the last terrace paddy fields in the country, giving the opportunity to develop sustainable approaches over the systematized input of concrete. An occasion for the revitalization of Senjo's village may have come.

But despite the extraordinary vigor of Japan's elderly population living in the countryside, with 91.62% of the country population living in cities — 70% of it being concentrated on only 3% of the land — it's unrealistic to think that the situation will change until urban residents become aware of their dependence on the condition of rural areas and decide to support these isolated communities. This support must be based on social, agricultural and environmental approaches, and be materialized by acts beyond the usual legislative body, which seems unable to prevent the upcoming tragedies of losing marginal villages, the furies of climate change, and the issues of food security — all of which, in one way or another, have an increasing impact on urban areas and are triggered by the abandonment of rural ones. 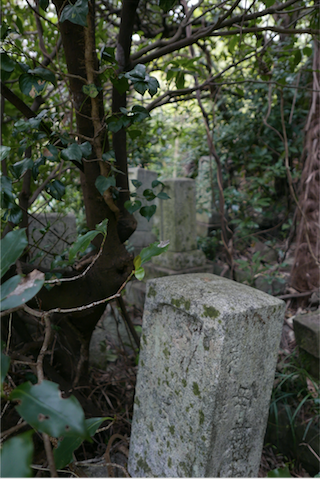 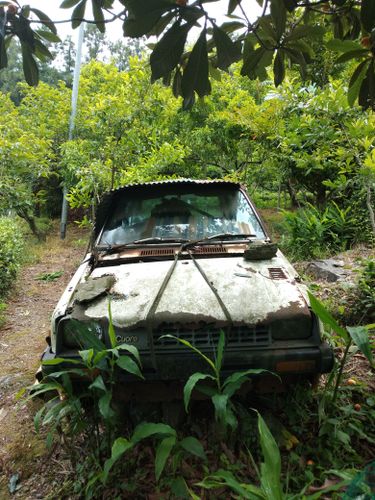 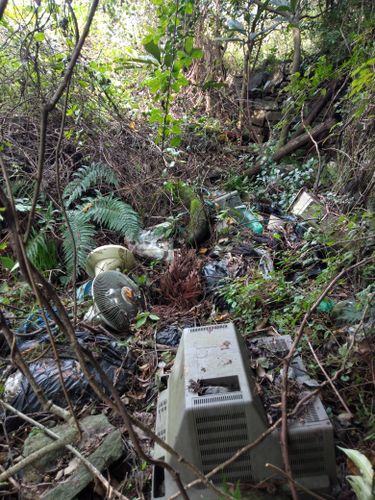 Abandoned graves, car, and household goods, illustrating the end of a multigenerational territorial anchorage and a future challenge for waste and contaminated soil management. 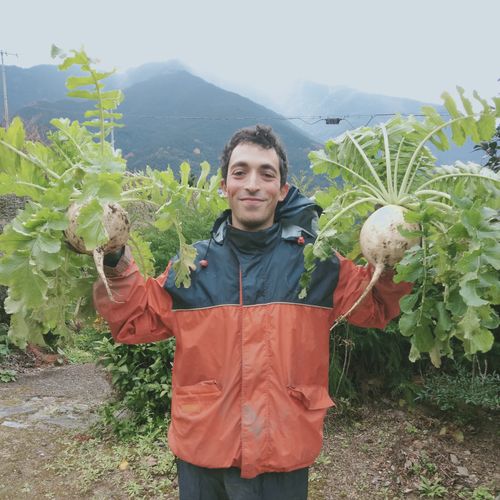